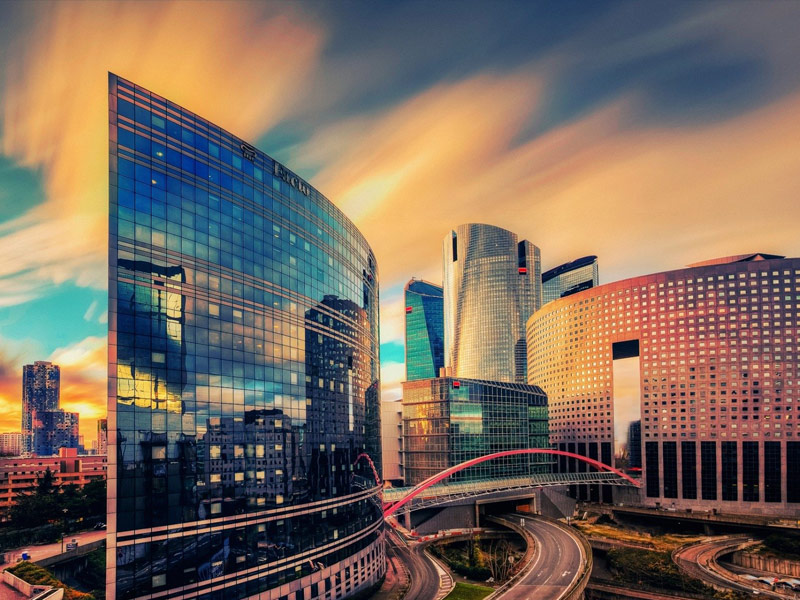 • Very popular study destination and welcoming to international students in admissions policies
• Incredible diversity of higher education institutions as well as programmes – something for everyone
• High-quality, well-recognised degrees
• Amazingly rich, old, and vibrant culture – a main reason France is the world’s #1 tourist destination
• Many French schools have added international elements to their courses, allowing students to experience other European cultures

“Metropolitan France is the largest nation in Western Europe, with a total area of 674,843 square kilometres. It is , the English Channel, and the Mediterranean.France is a land of flat plains or gently rolling hills in the north and surrounded by Belgium and Luxembourg, Spain, Germany, Switzerland, Italy, and by water bodies the Bay of Biscay west, forests and mountainous areas in the Pyrénées (south), Alps (east), and lower Vosges mountains (north east). The capital city is Paris.

Mainland France has cool winters and mild summers, with the occasional Mistral wind. The Mediterranean coast has mild winters and hot summers.

In 2,500 BC, the Celts settled in Gaul (France) and dominated until absorbed by the Roman Empire after 125 BC. In the Middle Ages, the Hundred Years War from 1337 to 1453 was fought over the throne left by the Capetian line of kings. By the 17th century, France was the dominant power in Europe under Louis XIV. The 18th and 19th centuries saw the French Revolution and Napoleonic Empire, the Franco-Prussian War, and beginning of the Third Republic. In the 20th century, France was occupied in both World Wars, which is perhaps a contributing factor in its modern foreign policy, which has seen it as a strong supporter of efforts against genocides (e.g., in the Balkans) and international terrorism. The Fourth Republic was established in 1946, and the Fifth Republic in 1958.

The current population is around 65 million with a median age of 39.4 years. Roughly 4.5 million immigrants live in France. The largest immigrant groups are the Portuguese, Algerians, Moroccans, Spanish, Italians, and Tunisians. France is one of the few countries in Europe where births exceed deaths. Overall population density is relatively low for Europe. More than three-quarters of the people live in urban areas. French is the official language.

France and particularly Paris have been key centres in European cultural development, including philosophy, arts, architecture, design, fashion, music, cuisine, wine, and filmmaking. A tradition of independent thinking has helped to fuel significant periods of internal social unrest. French beliefs and values hold that quality of life is of the essence and that work, a home, and education are essential rights.

Food and drink play a major role in French culture, with fresh produce, fine meats, cheese, and wine the mainstays of the family table and a source of pride internationally. Meals are generally slow, often with several courses, and accompanied by conversation.

France’s economy is the fifth-largest in the world in nominal terms and is a member of the G8 and G20 groups of leading industrialised countries. It has transitioned from an interventionist to a free market economy, with gradual privatisation of public assets and labour reforms; still, the government continues to play a significant role in some areas of the economy, particularly with regard to infrastructural industries. It has a mixed industrial and agricultural export-oriented economy, and is also prioritising its knowledge economy. France has an international reputation for excellence in the fields of space, transportation, sciences, biotechnology, health, and electronics, which many people attribute to its excellent higher education system.

With 82 million foreign tourists per year, France is the world’s most visited country and has the third-largest income from tourism in the world. The currency is the Euro.

Students can live reasonably well on around €800 a month (other than Paris, which is more like €1,000): accommodation €215–€450; food €210; books/stationery €50 and other €250, depending on location and lifestyle. An accommodation grant may be available for international students from the 2nd month (the amount varies according to rent, e.g., for a university room at €215, the grant is around €95). Tuition fees vary considerably, €500–€15,000 per year. Language courses can be expensive, depending on the type of institution and whether it is public or private. The average cost of health insurance is around €40–€50 per month.

France spends more per capita on education (20% of total budget) than many other Western countries and has traditionally had high academic standards. The Organisation for Economic Co-operation and Development (OECD) currently ranks the French education system 25th in the world.

France’s 83 public universitaires offer degree programmes in all disciplines and are spread throughout the country. There are three levels of degree: licence (three years), master’s (five years) and doctorate (eight years). Degrees can be academic, technical, or professional. To be considered for admission, international students need to demonstrate they have the credentials that would allow them to undertake higher education in their home countries.

Grandes écoles can be public or private, and they are a unique French invention. They are very selective in their admissions, much more so than the universitaires, and most specialise in business and engineering programmes. Others have reputations for public administration, teaching and research, veterinary medicine, and military sciences, to name a few. The grandes écoles have admission procedures and guidelines for international students as well as for French students.

Prospective international students must contact individual institutions directly for admission information and requirements for studying in France. Most programmes are taught in French, although more higher education institutions are now offering courses in English. Entry requires appropriate French-language proficiency. Some students may need to sit a French language test or undertake a French-language course. Enrolments should be made no later than September.

Prospective international students should check current visa requirements at the French embassy or consulate in their home country. A long-term student visa is required for study exceeding six months, except for EU members and other specified countries. Passports must be valid for the length of stay. Proof of financial capacity is also required. Visas cannot be extended and tourist visas cannot be converted into student visas.

Student visas don’t automatically include permission to work, though students from the EEA (plus Switzerland) are allowed to work freely. Campus France notes the following about international students and work:

“Since July 1, 2007, French law has allowed non-EU international students to work under the following conditions:

A residency permit (VLS-TS, validated by OFII, or a residency permit in addition to a visa) marked “student” entitles the student to accept paid employment for up to 60% of the legally defined working year (or 964 hours per year) without prior administrative authorization. However, the time that students spend in internships connected with their academic program (and covered by a written internship agreement) are not counted toward the maximum allowable working hours, even if the student is compensated during the internship.”

Within two months of arrival, international students on a visa must apply for a temporary residence permit (carte de séjour) from the local préfecture (services des étrangers or government centre). The permit is valid until completion of the applicant’s study, but must be renewed annually. Students need this permit to obtain housing assistance. Upon arrival, students (under 28) must also register with French National Health Insurance. This may be organised after arrival by the education institution.