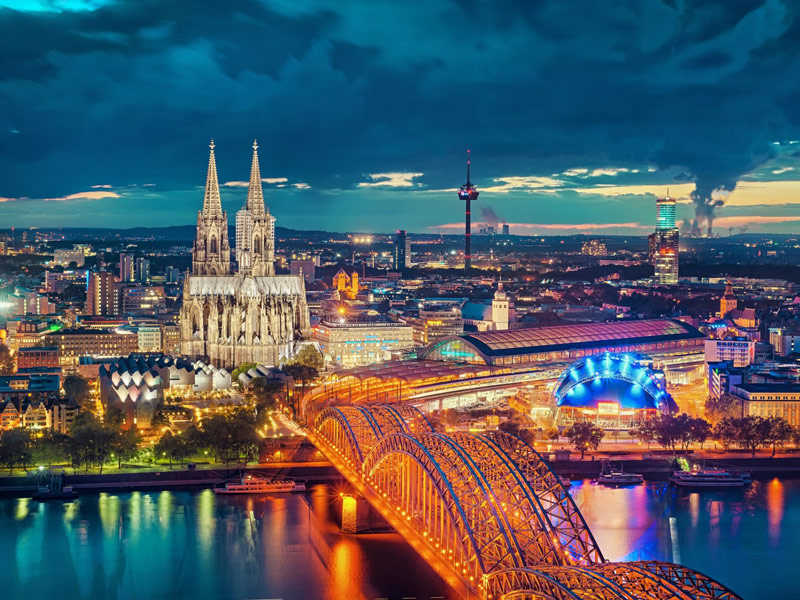 Location and Geography of Germany

Germany (Deutschland), the sixth largest country in Europe by land area (349,520 squarekilometres), is situated in central Europe, with coastal access to the Northand Baltic Seas. It is bordered by nine other European countries to the north,east, south, and west. It comprises lowlands (north), uplands (centre), and theBavarian Alps to the south. Berlin (in the northeast) is the capital.

The climate of Germany is temperate (and marine in the north), with cool,cloudy, wet winters and warm summers, occasionally tempered by the Föhn, a warmmountain wind. There can be marked variations in climate from region to region.

The German nationals of today have evolved from several different tribalgroups: Celts, Germans, Franks, Slavs, Romans. Germany has had a long andchequered history with periods of dominance, repression, and division.

Germanic invasions destroyed the declining Roman Empire in the 4th/5thcenturies AD, and Charlemagne was crowned Holy Roman Emperor in 800AD. From the15th to early 19th centuries, the Hapsburgs ruled until the decline of the HolyRoman Empire in 1806. Within this period was the Thirty Years’ War (1618–1648),which devastated Germany and left the empire divided into hundreds of smallprincipalities.

After the Napoleonic Wars of the 19th century, Germany reorganised and aGerman Empire was established. The growing influence of Germany then collidedwith the interests of other nations leading into World War I, the GreatDepression, World War II, and the separation of West Germany and East Germany.

In the 1960s and 70s, a large immigration wave began in Germany, withworkers from Greece, Turkey, Italy, Morocco, Portugal, Tunisia, and the Balkanscoming in to help with a labour shortage during a significant economicexpansion (dubbed the “economic miracle”). East Germany attracted workers fromVietnam, North Korea, Angola, Mozambique, and Cuba. After reunification,another wave came from Eastern Europe (1990s). Many of these workers stayed andhave permanently altered the composition of the German population, making itmore multi-ethnic.

Following the German Reunification in October 1990, Germany became a unitedand sovereign state for the first time since 1945. It has a population of over82 million and is the second-most populated country in Europe. Populationdensity varies markedly from urban (very dense) to rural (less dense) areas.

The median age is 43.8 years. Over 95% of the population speaks German astheir mother tongue; other languages include Sorbian, North Frisian, Danish,Romani, Kurdish and Turkish.

Germany is still basically a homogeneous ethnic society (German 91.5%,Turkish 2.4%, other 6.1%). A trend toward a more multicultural society is nowoccurring with a greater emphasis on integration of immigrants. Restoring thesocial unity between West and East has been an ongoing agenda of the Germangovernment since reunification in 1990, with living conditions, education, andhealth as important priorities. The family remains at the core of Germansociety though traditional gender roles are disappearing, bringing Germansociety and culture more into line with the modern Western world.

Culture in Germany has many facets. From world-famous orchestras,architecture, museums, churches, and traditional cuisine to avant-garde art andmusic, the international student will find a mix of modern and traditional. TheGermans enjoy the outdoors along their beautiful riverbanks and in the gardenswhich can be found in most cities and towns. Germany is a sporting nation withfootball the no.1 sport. Walking and cycling are common leisure activities.Train travel is excellent and fast, making it easy to get around the country tofestivals and other cultural events.

Germany is a member of the European Union (EU). Its economy is the largestin Europe and the fourth-largest in the world after the U.S., Japan, and China,and it is very export-oriented (second-largest exporter in the world). It isamong the largest and most technologically advanced producers of iron, steel,coal, cement, chemicals, machinery, vehicles, machine tools, electronics, foodand beverages, shipbuilding, and textiles. It is the leading producer of windturbines and solar power technology in the world.

Some of the largest annual international trade fairs and congresses occur inGerman cities such as Hanover, Frankfurt, and Berlin. The currency is the Euro.

The political structure of the Federal German Republic is complex,consisting of a central federal government and 16 states. The government andeconomic systems today are based predominantly on those of West Germany priorto reunification. West German Basic Law (or constitution) became thecornerstone of the central, federal government in 1990. The FederalConstitutional Court has the power to repeal legislation if such legislationcontravenes the Basic Law.

Most areas of government are centralised. The states, however, areresponsible for schooling (and to a large extent tertiary education), internalsecurity (including policing), as well as the organisation of localself-government. The federal government supplements the states’ income toassist them in managing and administering these areas.

International students living in Germany can generally live on €750–€950 amonth: accommodation €230–€400, food €220, books/stationery €50 and other €250(e.g., transport, entertainment, laundry, telephone) depending on location andtype of housing. Tuition fees, where applicable, are an additional cost. Healthinsurance is usually around €50–€60 a month. Student accommodation is lessexpensive than renting a flat. International students should be aware thatoften flats are let unfurnished and that there may only be a sink in thekitchen area. Tenants then have to provide all other kitchen facilities.

Most of these institutions are public (government). There are some privatelyrun institutions; however, public education is the first choice for most (morethan 90%).

Close to 250,000 international students are enrolled at German institutes ofhigher education. This makes Germany among the most sought-after destinationcountries in the world.

International students may have to pay some minor tuition fees. However,this is a recent situation and doesn’t apply to all higher educationinstitutions. Therefore, it is essential to source such information from theindividual institution to determine if tuition fees apply.

There is a German language proficiency requirement for entry to highereducation institutions, the DSH (DSH-Prüfung). In some situations, basiclanguage may be accepted dependent upon the course, the level of study, and thelanguage of instruction. German-language courses are available at mostinstitutions.

To gain acceptance, non-European Union (EU) students may have to provefinancial capability. Applications should include evidence of capacity to meetthe costs of studying/living in Germany.EU regulations govern the assessmentstudents from EU countries wishing to study in Germany. Non-EU students mayneed to obtain a student visa prior to entering Germany. Students should firstcheck with the German embassy or consulate in their own country to obtain themost up-to-date information about student visa requirements. Visa applicationprocessing for long-stay visas can take several months, so students must allowsufficient processing time prior to their intended date of entry. Students whowish to seek work while studying need to check if they will need a work permit.

Within seven days of arriving in Germany, all international students mustregister with the relevant district administrative office. Proof of, orapplication for health insurance coverage, must be submitted to the districtoffice of the AOK (Allgemeine Ortskrankenkasse). After three months, allinternational students – regardless of country of origin – need to apply for aresidence permit (Aufenthaltserlaubnis).