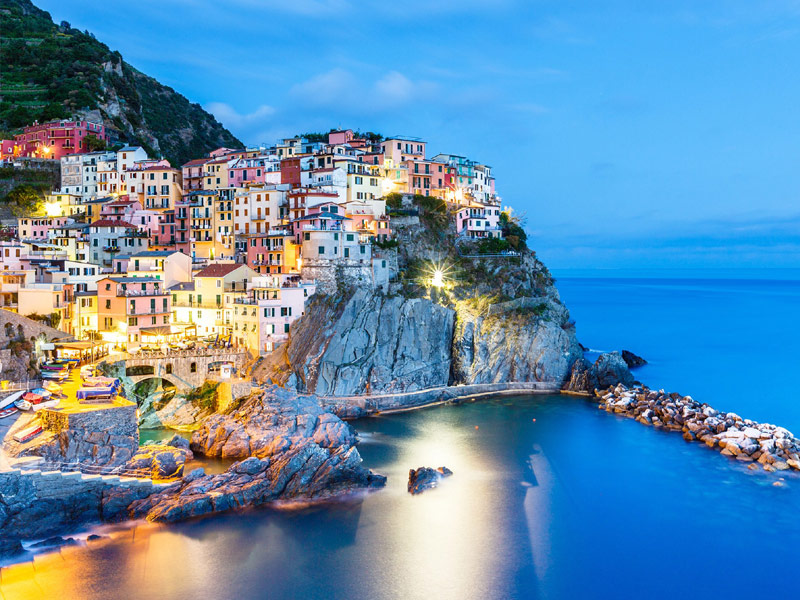 • Highly developed, industrialised economy
• One of the most appreciated cultures in the world (and beautiful language)
• Incredible food and wine traditions
• More UNESCO World Heritage sites than any other country
• Sophisticated tourism infrastructure makes studying in Italy very pleasant

Italy, with a total area of 301,230 square kilometres, is a long, boot-shaped peninsula extending into the Mediterranean Sea, plus the islands of Sicily and Sardinia. (San Marino and Vatican City are small autonomous states embedded in Italy). France, Switzerland, Austria, and Slovenia adjoin to the north, the Adriatic and Ionian Seas are to the east, and the Tyrrhenian Sea is to the west. Most of Italy is rugged, mountainous terrain with the Alps in the north and the Apennines running the entire length of the peninsula to Sicily. Rome is the capital city.

Beginning in 753 BC, Rome gradually expanded through conquest and alliances to dominate Italy and then the entire Mediterranean world until 476 AD. Following a period of invasions by German and other tribes, Italy stabilised under Charlemagne during the Middle Ages.

During the Italian Renaissance (15th to 16th centuries) the Italian City States re-emerged as centres of commerce, art, and learning; Italian thought and style influenced all of Europe. However, Italy was fragmented, with destructive conflict and frequent incursions by foreign powers, particularly France, Spain, and Austria. But after the Congress of Vienna in 1815, Italy’s national identity developed; Italy became a nation state in 1861.

Italy experienced changing alliances in the period covering both World Wars. In 1948, Italy became a republic. Since then Italy has had numerous changes of government and unstable political coalitions.

Italy’s population is just over 58 million with a median age of just over 43. Italy has the 5th largest population density in Europe, and around two-thirds of Italians live in urban areas. The official language is Italian. Also spoken are regional dialects and some German, French, and Slovene.

The Italian people are great promoters of the art of living and enjoying life or “Ars Vivendi.” Family and the extended family/community networks are at the core of Italian society. Deep Roman Catholic roots permeate traditions, many of which revolve around seasonal festivals with prescribed foods and rituals. Food is a highlight in Italy – especially when it comes to carefully prepared food and fresh, local ingredients. Like the French, Italians celebrate the art of eating unhurriedly, with gusto, and with company.

The countryside is varied and beautiful, and the cities are bustling and dynamic. Italy has more UNESCO World Heritage sites than any other country in the world.

Italians (again, like the French) value fashion and appearances, as well as the way people carry themselves. They are world-renowned for their sense of style. At the same time, they are a warm, welcoming people who love to relax and who value the art of conversation.

Italy has a diversified industrial economy comprising a developed industrial north and a less-developed agricultural south with high unemployment. High-quality consumer goods are produced by small- and medium-sized enterprises. Export highlights include fashion, automobiles, appliances, and industrial goods. Tourism now contributes more to the economy than agriculture. Italy also has a sizable underground economy (as much as 15% of GDP).

Italy faces some significant challenges to its economy, including the national debt level, high taxation, rigid labour laws, an expensive pension system, and an ageing population. At the same time, the country boasts a high quality of life (8th highest in the world according to The Economist).

Italy ranks as the seventh largest economy in the world according to the International Monetary Fund. It is a member of the G8 industrialized nations, the EU, and the OECD. The currency is the Euro.

Italy is a parliamentary republic. The head of state is the president, but executive power rests with the prime minister and the cabinet. The Italian parliament has two branches: the House of Deputies and the Senate. Local government is divided among 20 regions subdivided into 100 provinces. Five of the regions have greater autonomy to reflect special cultural identity: Aosta, Friuli Venezia Giulia, Trentino-South Tyrol, Sardinia, and Sicily. Italy was a founding member of the European Union (EU).

Living costs can be high in Italy, especially in big cities like Rome. Italy ranks among the highest taxed countries in the world and among the most expensive EU countries for living costs. Actual costs are difficult to determine as inflation has been increasing steadily for several years. A very rough estimate figure is around €1,000–€1,500 per month for accommodation, food, and other living expenses in a city like Milan, and a bit less in smaller cities. This doesn’t include tuition fees. To obtain costs of tuition, students must contact the actual institution they are planning to attend.

Following a review of the system, control and management of education is being decentralised. Previously, all education was controlled by the Ministry of Education. Greater administrative and educational responsibility and autonomy are being transferred to the institutions themselves. In 2008, further reforms were proposed, mainly for primary school education. International students wishing to study in Italy should keep informed about any further changes to education that may occur.

In 2000, Italy changed to a two-tiered school system: primary for five years, secondary 1st Grade (medie) for three years, and secondary 2nd Grade (scuola superiore) divided into two years (bienno) and three years (trienno) of specialised learning (e.g., classical, scientific, technical and artistic studies). Education is free until the end of primary education. School is compulsory till the age of 16.

More information about each specialisation can be found at:

International students from EU countries do not require a visa to study in Italy. All other nationalities must apply for a student visa at least three months prior to expected date of arrival. For up-to-date information on student visa requirements, prospective international students should contact the embassy or consulates in their home country. Important visa requirements are evidence of financial capacity, affidavit of parental permission and a responsible person in Italy if under 18, and evidence of acceptance at an approved institution.